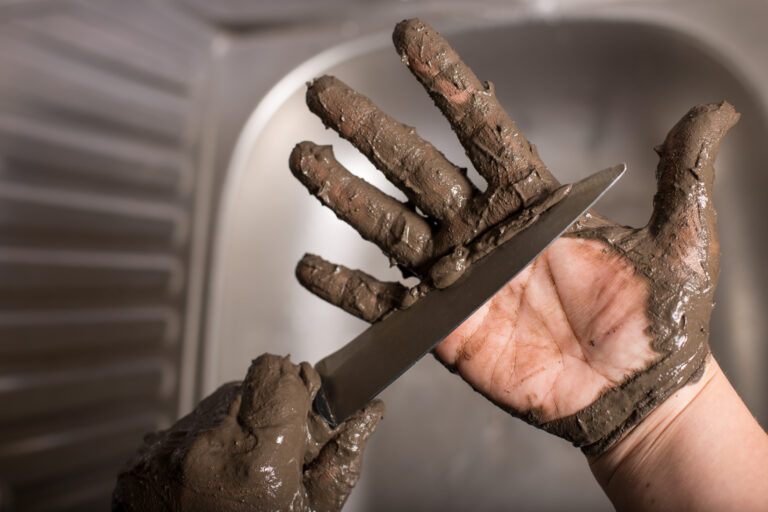 If you want to get the best possible polish results on your rocks, adequately cleaning your tumbler is absolutely essential. The main reason for this is that the tumbling process is accomplished in multiple stages, each of which requires a different type of grit. By cleaning in between stages and after each batch of rocks is completed, you can ensure that the only grit in the machine is the type you actually intend to use. Left uncleaned, your tumbler will accumulate grits of varying coarseness, leading to an inferior final polish on the stones you’ve selected for tumbling.

Beyond making sure that you will get a higher quality result from the tumbling process, cleaning your rock polisher will also help to prevent the drum from leaking. Grit or other sediment that builds up on the lip of the drum lid can prevent the lid from creating a tight seal. While this may not sound like a big deal, the result of a leaking drum will be a large mess and a poor polish on your stones, often requiring you to go back and start the process over again.

How to Clean Your Rock Tumbler

Cleaning a tumbler is a relatively simple procedure, but it needs to be done thoroughly each time your rocks are moved to a new stage of the process. Ideally, you should always clean the barrel of your tumbler while it is still wet inside, as allowing the grit and small rock particles to dry on the barrel’s surface will result in a crust that can be very stubborn and difficult to remove.

The best way to clean out the barrel is usually to use a bit of water as a rinsing agent and a soft brush as an abrasive to remove the built-up grit. You can use several different kinds of brushes for this process, but many rockhounds find that either a soft horsehair brush or a relatively stiff toothbrush provides the needed abrasion without damaging the inside of the barrel. If you have extremely hard deposits of grit and rock particles on the inside of your barrel, you may have to use a wire brush or a fine steel wool to remove them, but always try to avoid these options if possible to avoid any potential damage to the body of the barrel itself.

In addition to using a brush to remove grit, it’s important to rinse out the barrel of your tumbler multiple times between each stage of the polishing process. This will help to ensure that any small amount of residual sediment is removed and that you’ll start the next stage with a clean barrel. When it comes to cleaning your rock tumbling machine, it’s always better to be too diligent and expend some extra effort than it is to accidentally leave the grit from a previous step in the barrel.

The Importance of Cleaning the Rocks Themselves

One of the biggest mistakes a rock and mineral enthusiast can make when using a tumbler is to thoroughly wash the barrel without adequately removing residual grit from the rocks themselves. Even after an initial rinse, small cracks, crevices or rough spots on a stone may still have some grit in them that will work its way into the next stage of the polishing process. For this reason, it’s very important to thoroughly clean each rock before you add it back to the barrel for the next round of tumbling.

Proper cleaning of rocks is especially important before the stones go through the tumbler the first time. Bits of mud, sand or other debris attached to rocks can prevent them from receiving complete exposure to the polishing grit that is being used, resulting in a poor initial smoothing. It’s usually a good idea to completely submerge the rocks you intend to polish in a bucket of water to loosen and remove sediment, then rinse them with a hose or under a sink several times to remove any that remains. The same procedure can be used to remove residual grit in between sessions of tumbling.

Another useful way to remove grit from the stones is to remove and rinse them, then return them to the barrel of the rock polisher once it has also been rinsed thoroughly. Add enough clean water to cover the stones completely, then run the tumbler for a short period of time. This will help to remove any additional grit that may have remained in imperfections on the surface of the stones. After a final rinse of both the rocks and the barrel, you’ll be ready to move on to the next step.

While there aren’t that many things that can go wrong with cleaning your rock tumbler, there are at least a few difficulties you might have when you’re just getting started. Here are a few of the common problems you may encounter and the best solutions to them.

I Wash My Barrel and Rocks, but I’m Still Getting Grit Contamination

If you’re going through all the cleaning steps and still seem to be having problems with residual grit staying behind from previous stages, one of two things is happening. The first possibility is that there may be some spot in the tumbler barrel that’s catching and hiding grit, while the second is that the grit is getting caught on the rocks themselves. Check your barrel thoroughly for any places where grit may be building up, particularly under the lip where the lid rests. If you’re sure that the problem isn’t with the barrel, inspect the stones you’re polishing for cracks and rough areas that may catch grit and hold onto it even through the rinsing process. Unfortunately, there are some stones that may have to be removed from the batch because they are too deeply textured and will keep you from the getting the results you want for the rest of your rocks.

As important as washing out your tumbler is, we’re all human and prone to forgetting things. At some point, it’s likely you’ll give your barrel an initial rinse but then forget to clean it thoroughly before starting in on the next step of the polishing process. If this happens and you catch your mistake quickly enough, simply stop the rock tumbler, dump out the rocks, clean everything thoroughly and then start that step of the process again. You may waste some grit, but doing so will give you better final results.

I’m Absolutely Sure I’m Cleaning Everything Right, but I Still Can’t Get a Good Polish

If you’re cleaning everything thoroughly, rinsing your rocks and still seem to be having problems associated with coarser grits during later stages of the polishing process, there’s likely one very simple explanation. Some stones, particularly rough sedimentary rocks like sandstone, are prone to releasing rough sediment as they are struck by other rocks in the tumbler. As a result, they can introduce very coarse grit of their own during the tumbling process, even if you’ve carefully cleaned everything else exactly as you should.

To avoid this problem, you need to be very selective about the rocks you put in your rock polisher in the first place. Be sure that the stones you’re going to polish aren’t soft or brittle enough to flake off and create their own grit. While it isn’t a perfect way to determine whether a rock is suitable, you can try rubbing it against another rock by hand to see if coarse grains of the stone break off. It’s also a good idea to avoid rocks that have deep faults or fissures in them that may cause them to break during the tumbling process. When this happens, there are bound to be some rock flakes created that may inflict unsightly scratches on the rest of your rocks, especially as you enter the final polishing stages with very fine grit being used.

This site uses Akismet to reduce spam. Learn how your comment data is processed.